Back in 2014, we came across a "Countryfile" documentary of Valais Blacknose Sheep in their native Swiss Alps, and it was love at first sight! Only problem was, USDA does not allow import of live sheep or embryos from Europe. Undaunted, we began working on "finding a way" to acquire them! At first it seemed impossible, as there was also a ban on semen import at the time. Nonetheless, we went ahead and acquired suitable foundation ewe lambs in early 2015, hoping that by the time the lambs were mature that semen would become available. As luck would have it, the ban on semen import was lifted in 2016 we began searching for breeding prospects. USDA criteria are very stringent, but eventually our friends at Highland Valais Blacknose Sheep in Scotland found several suitable donor rams for us! 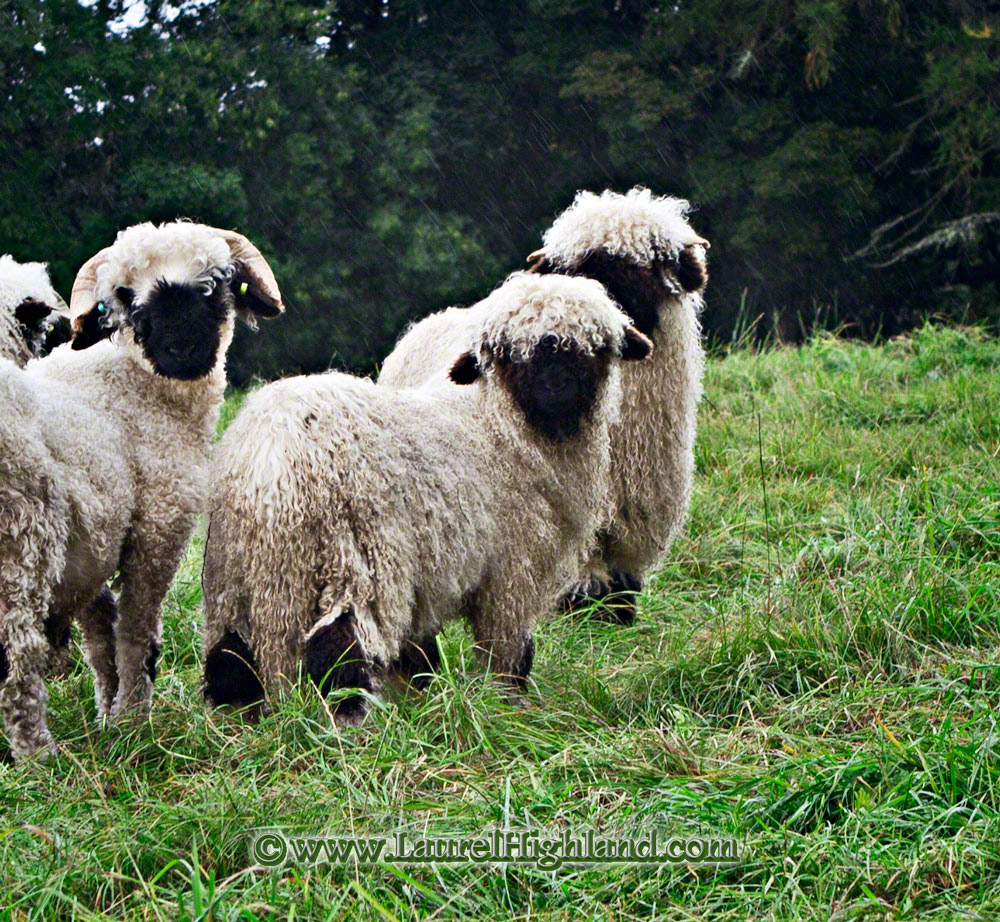 We were thrilled to be one of the first breeders to import Valais Blacknose Sheep genetics into the USA in 2017! These genetics came in the form of purebred ram frozen semen, to begin our long-awaited breeding-up program! USDA still does not allow importation of embryos or live sheep, so "breeding-up" is the ONLY legal way to have this breed here in the USA right now. Our original imports of frozen straws came from Solwaybank Commander and his sons, Highland Danny and Highland Darnell. These were several of the ONLY available rams at the time with the required (and very rare!) ARR/ARR (most-Scrapie-resistant) genotype. Scrapie is a lethal, contagious disease that may occur in sheep, but some sheep are genetically resistant to it. (See more information about Scrapie here.)

Our original foundation ewes in 2017 were either purebred Scottish Blackface, or half-bred Scottish Blackface/Leicester Longwool F1 crosses. We specifically chose the latter cross as we felt they may have more in common with purebred Valais Blacknose, with the Leicester Longwool genes adding a larger frame, longer fleece, wool forelocks, wool on limbs, more docile temperament, etc. The Scottish Blackface of course add genetics for black faces and black limbs, as well as horns in both sexes, mountain hardiness, Roman noses, and plenty of fleece! (The horns of Scottish Blackface and Valais Blacknose are not exactly alike, so we considered the Scottie horns a pro and a con as far as choice of foundation ewes.) Theoretically, more genes that the foundation ewes share in common with the purebred Valais Blacknose, the fewer generations will be required for the offspring to look like the real deal! Each generation will be bred to pure Valais Blacknose (VBN), so 1rst (F1) generation will be 50% VBN genetically, 2nd (F2) will be 75% VBN, 3rd (F3) will be 87% VBN, and so on. As one might guess based on the pictures of some of our F1 lambs at the top of this page and on the right, we were happy with our choices!

Laurelhighland Jenni, our first F1 lamb and first offspring of Highland Danny, was born in April 2018.